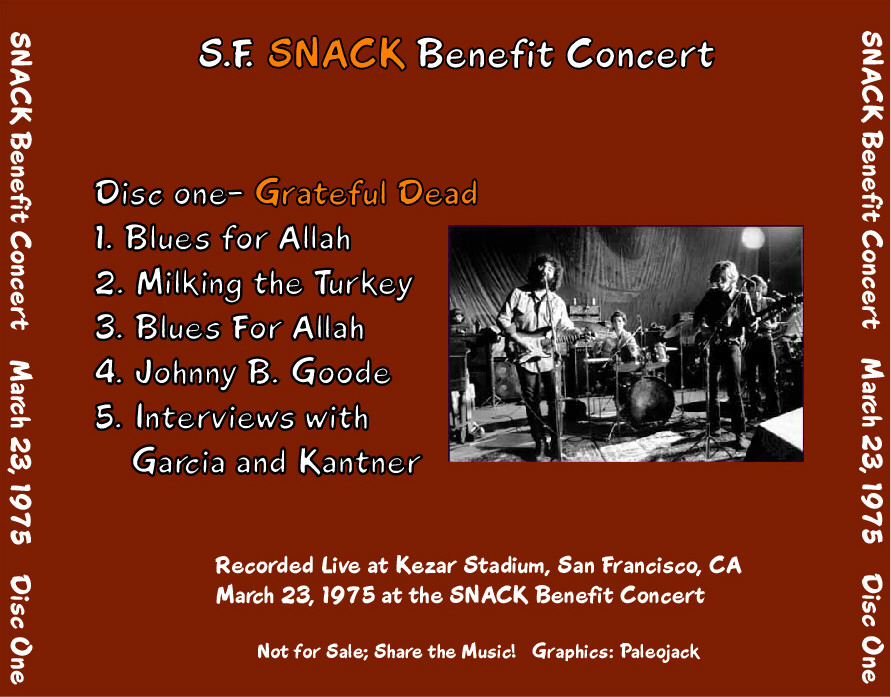 The Interview section, with Jerry, was done before the show on 3/23 and, while he mentions Crosby as being with the band, he never showed!

session" for the SNACK show and DOES feature Crosby, although his input

Reviewer: WheelbarrowJohnny - favoritefavoritefavoritefavoritefavorite - May 12, 2020
Subject: Amazing show
The fog was thick in the Richmond, Kezar was walking distance from my friend Ed's place which was right around the corner from the Jefferson Airplane black Victorian with gold pillars.Although getting into Kezar rather early, our seats were litteraly on the last row on the park (N) side of Kezar. We litterally could lean over Kezar's wall and look at Golden Gate Park from where we sat. All the bands that day rocked-it and between the bands Bill Graham had local sports heroes, like Willie Mays talk about the need to raise money for San Francisco School sports. This was when most people were talking and partying which made it impossible to hear what they were saying. The music however was of the hook all day, with my personal highlight of Johnny B Goode where we were dancing and "Go-Johnny -Go!!" at the top of our lungs. Although it was a marathon of a day, I'll never forget walking back to Ed's to continue the party.
Reviewer: Mellowman - favoritefavoritefavoritefavorite - July 26, 2017
Subject: Additional tracks?
Where did the tracks come from after Johnny B Goode? I always heard the Dead's set was about 45 minutes and the song list was:
Blues For Allah>
Stronger Than Dirt>
drums>
Stronger Than Dirt>
Blues For Allah>
#Johnny B. Goode

So where did the tracks come from post JBG? The jams are great, but would like to know when they were played.
Reviewer: c-freedom - favoritefavoritefavoritefavoritefavorite - March 9, 2016
Subject: King Solomon's Marbles
This music is key to much of what would be coming down the road for the Grateful Dead. Many say the Dead went Disco with Shakedown. I submit the DEAD were part FUNK band from 1973 onward.
Reviewer: kneadles1 - favoritefavoritefavoritefavoritefavorite - December 20, 2014
Subject: MY FIRST SHOW!!
I was 15, had lived in SF since 1969 and started going to concerts a year or so prior. My sister turned me on, and was always buying me albums. Anyhow, some friends and I heard about the SNACK benefit, decided to go. $5 a ticket. Crazy scene...Amazing lineup, Jerry and Friends played early in the morning, maybe 9:30/10:00 and were followed by, not necessarily in this order, The Doobie Brothers, Joan Baez, Santana, Jefferson Starship, Bob Dylan with Neil Young and the Band (all together as the Headliners)...15 years old...

This set the stage for many fine years of concert going, to this date.

This show, this recording.

Excellent quality for the time, and none of us there had heard a lick of the Blues for Allah stuff. The place was mesmerized, and Johnny B Goode is BLISTERING....

You can really hear all the musicians, including David Crosby on Rhythym Guitar, and Merl....

This show most certainly set the stage for the statospheric 76 and 77 years.....which I was fortunate to attend some shows as well...
Reviewer: sinan_166 - favoritefavoritefavoritefavoritefavorite - December 20, 2014
Subject: peak of life
The power of the sonic beast they unleash during the half hour Blues For Allah jam is an unprecedented phenomenon. Tears are falling from my eyes as I'm listening and writing right now. NEVER has there been a musical performance so otherworldly, and even otherworldly can't do justice to this 'cause it ultimately defines it in space and time, whereas this thing transcends everything. I would, without a shadow of a blink, give 20 years of my life just to witness this show live.

About Miles Davis opening for the Dead in 1970, Phil Lesh said : “As I listened, leaning over the amps with my jaw hanging agape, trying to comprehend the forces that Miles was unleashing onstage, I was thinking What’s the use. How can we possibly play after this? […] With this band, Miles literally invented fusion music. In some ways it was similar to what we were trying to do in our free jamming, but ever so much more dense with ideas – and seemingly controlled with an iron fist, even at its most alarmingly intense moments.”

I firmly and sincerely believe, if Miles witnessed this show, he would've said the same exact thing about the Dead.

THIS IS POWERFUL BEYOND DESCRIPTION.
Reviewer: fibber - favoritefavoritefavoritefavoritefavorite - July 15, 2013
Subject: history
No you can't rewrite history. But if folks want to speculate, so what? As great moments as there still were ahead, this powerful and unique set is a hint of what could have been if artistic exploration was all that mattered. As it was, other things took precedence, and out from Garcia's life went Ned Lagin and Merl Saunders, who both sound great here and were far better free improvisers than Godchaux. And speaking of them, no, Merl was never in the band, but Ned was, playing 20-something shows in 1974 which featured arguably the most radical music (Seastones) ever played to stadium audiences.
Reviewer: Burnt Rich - - June 2, 2013
Subject: You guys below are trying to rewrite history!
Questioning why Jerry kept Donna around, what would happen if Merl would have stayed with the band he was never in, etc, etc.

The history has been written. The notes played. Volumes written. Accept it for what it is. Go start your own fire.....

Just appreciate one of the most original acts for what it was. Nobody wrote a rule book.

This show is a one-of-a-kind performance. It is a high form of artistic expression. You will hear no music on Planet Earth like it before, during or since. It is what it is.
Reviewer: peasant - favoritefavoritefavoritefavoritefavorite - October 17, 2012
Subject: Short but sweet
This just had to blow people away. The last Grateful Dead concert was just 5 months previously at Winterland before the "hiatus." And THIS is what the folks were treated to. Granted the help of Merle Saunders brings a different quality to the sound, but the jamming is intense, tight, and focused -- not loose, meandering, and sometimes aimless as sometimes was starting to occur throughout 74.

I will not quibble with the fact that Donna's contribution was below the standards of the band, and that they would have been served better by her absence.

However, I will challenge any assertion that Keith's keyboard work wasn't some of the best ever done with the Dead.

You won't hear Keith just playing the same six or seven notes over and over again, like you might hear Pig do on some of the Dark Stars I've heard.

Some may say that Jerry was sweet on Donna, and that's why they kept the two of them around, but I think it was Keith's contribution on piano that the band valued.

That's my story, and I'm sticking to it.
Reviewer: snojon - favoritefavoritefavoritefavoritefavorite - May 4, 2010
Subject: merl rocks
with the debate over which dead keyboardist was the best, merl is often left out of the discussion. granted his tenure was short, I don't even know if he was ever an official member of the band, but here you can hear his strong influence. He seems to elevate Jerry's playing by challenging him during these jazzy jams. I never really cared for "blues for allah" that much, but I had never heard it like it's played here, WOW!!!!!! in retrospect, it's too bad the band didn't have the foresight to kick the Godchaux's out of the band sooner, and done everything possible to recruit Merl as a permanant member. one can only wonder the direction the band would've taken.

Uploaded by Matthew Vernon on September 25, 2009